A three-time presidential runner-up was also on the losing end of the nation’s first Trial of the Century. His accomplishments in life still outstrip those of most mortals. 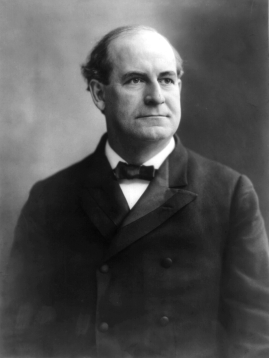 Since the dawn of the modern two party system in the mid-1800s, William Jennings Bryan is the only major party candidate to be defeated in three presidential elections, losing as the nominee of the Democratic party by increasingly large margins in 1896, 1900, and 1908.   Elevating him, so to speak, above later presidential also-rans like Thomas Dewey and Adlai Stevenson, Bryan also managed to align himself on what today would be called “the wrong side of history” on two of the most monumental social issues in twentieth century America.

Dubbed “The Great Commoner,” Bryan was a gifted orator whose forceful rhetoric and commanding voice were frequently deployed in the service of causes sympathetic to the working man in the face of establishment interests.   He was a twice-elected Representative from Nebraska when he rose to speak at the 1896 Democratic Convention, delivering a blistering attack against the prevailing gold standard that, in his view, aggrandized the East Coast financial elite at the expense of debt-ridden rural farmers and small businessmen. “The Cross of Gold” speech, as it came to be known (for it’s rousing closing line “You shall not crucify mankind upon a cross of gold”) catapulted him from dark horse candidate to his party’s nomination.

After three years of economic depression under Grover Cleveland and landslide GOP victories in the previous mid-terms, the 1896 presidential election was considered the Republicans to lose. With a vigorous campaign that was among the first to feature the candidate himself out on the hustings, however, Bryan nearly pulled the upset. He brought his message to the people, speaking over 500 times in 27 states. In the end, it was enough to burnish his standing as populist orator, but not enough to overcome his well-financed Republican opponent, William McKinley, who successfully added skilled professionals and wealthier agrarians from the Upper Midwest and West Coast to his urban Northeast corporate/industrial base. 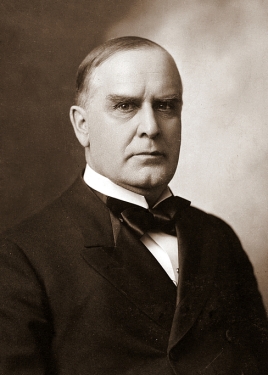 Bryan would try again in 1900, facing even longer odds than he had in ’86. In his first term, McKinley had presided over rapid economic growth, and had overseen victory in the Spanish-American War, which wrested from Spain control of Puerto Rico, Guam, the Phillippines, and Cuba. While Bryan supported the war, he made “anti-imperialism” the centerpiece of his campaign and when he failed to reconcile those apparent extremes he lost credibility and votes, falling 292-155 in the electoral college.

With Bryan sitting out the 1904 election, Democrats nominated A New York judge named Alton Parker to go up against Theodore Roosevelt, who had ascended to the presidency upon the assassination of McKinley. Alton Parker, Teddy Roosevelt. You’ll find one of those guys’ faces carved in stone in South Dakota.

After spending most of the (20th century) ’00s speaking on the Chautauqua lecture circuit and running the newspaper he founded called The Commoner, Bryan vied for the presidency a final time in 1908. He handily won the Democratic nomination, and went up against Roosevelt’s hand picked successor, William Howard Taft. Sounding the same progressive gong as he had years earlier, but to diminishing effect, Bryan’s campaign slogan “Shall The People Rule?” might just as well have been “Third Time’s the Charm?” No and no. 321-162 was the final.

Bryan never again ran for political office but he served as Woodrow Wilson’s Secretary of State from 1913 to 1915, and he stayed active as a public intellectual whose views on all manner of issues, social and political, would continue to exert great influence. 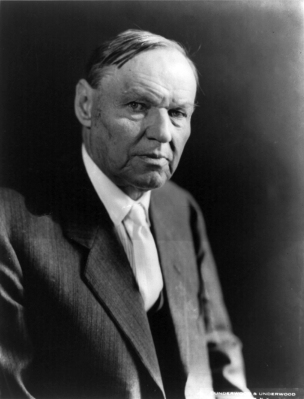 He was a devout Christian, by turns Baptist and Methodist in his youth, and later Presbyterian. Bryan’s views were consistently anchored by a firm morality grounded in the Bible. That morality led him to support prohibition (“wrong side of history” number one, for those keeping score) and, among very many other issues, women’s suffrage, workmen’s compensation, minimum wage, and an eight-hour workday (“right side of history” but we are not counting those at the moment). Most dramatically for his legacy, it also put him in court arguing against the theory of evolution.

The setting was Dayton, Tennessee, the occasion was the so-called “Monkey Trial,” the defendant was high school teacher John Scopes and the defense attorney was Clarence Darrow.   Bryan was recruited to serve as a prosecuting counsel for the case, and late in the proceedings he took the stand himself as a “Bible expert” to answer Darrow’s piercing challenges to a literal reading of the book. Did Eve really come from Adam’s rib? Was Jonah really swallowed by a whale? Initially confident and defiant, Bryan’s replies became halting and evasive. After two hours of increasingly contentious testimony, the judge gaveled the court adjourned. The case, and Bryan’s life, were effectively over.

While the jury ruled in favor of the prosecution, the conviction was later overturned on appeal (on a technicality) and in the broader cultural debate between religion and evolution, Bryan’s fundamentalism was considered the big loser. Five days after the trial ended, Bryan died of fatigue related to diabetes.

Bryan’s legacy is mixed.   He stands in the top tier of American political orators, and the “Cross of Gold” speech is considered a classic, a precursor to the sort of dramatic defining statements that major party aspirants still reach for, usually without success, during the nominating conventions.

In the movie “Inherit the Wind” and the play on which it’s based, Bryan comes off as a great buffoon hoodwinked by Darrow into sophistic answers or evasive non-answers to questions about the literalism of the Bible.

Taken as a whole, Bryan’s career in public service was more impactful than many, possibly even most, presidents. Ribbing aside, the fact is, he was on the “right side of history” much more often than not, an early and vocal advocate for many issues that would directly advance his ideals of the role of a federal government in active support of a common man possessed of dignity and due the highest respect.

In the end, he may simply have been a man out of time. His views on campaign finance reform and trust-busting monopolies might resonate more today than they did a hundred years ago. Take away the monkey trial, and Bryan’s consistent message and deeply felt political ideals might win a candidate like him the Democratic nomination in 2020.

Thomas Dewey and Adlai Stevenson, both oh-for-two since the emergence of the Republican Party in 1856; and Henry Clay, oh-for-three in the period from 1804-1856, running under various party banners.