In Gangland Chicago, Al Capone emerged as Public Enemy Number 1. Despite being massively outgunned, particularly on one particular Valentine’s Day, his rival Adelard Cunin, known to history as Bugs Moran, gave him a hard run for his dirty money. 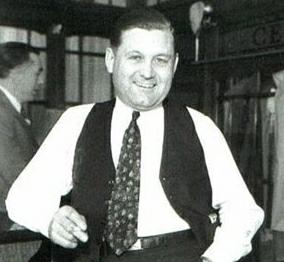 It’s 1924. Prohibition is in full swing and so is the era of the Chicago bootlegger. George “Bugs” Moran stares across the coffin of Dean O’Banion, murdered leader of the North Side Gang, at Johnny Torrio and his lieutenant Al Capone, coldly contemplating vengeance. It was no secret that the Italians had arranged the hit on O’Banion. The murder would spark five years of bloody gang warfare between the North Side Irishmen and the Italians in the so-called Chicago Outfit in the South, culminating in a famous shooting on February 14, 1929. Moran did not die that Valentine’s Day, but he was effectively finished as a real rival to Capone.

Flash back half a lifetime: George Moran was 19 and still going by his birth name Adelard Cunin when he ran away from his home in Minnesota and found a place among the street toughs of Chicago. Within a couple of years, he could boast arrests for burglary, larceny, and horse-snatching (that’s where you steal a horse and demand ransom from the owner), three stints in the hoosegow, and a four-inch knife scar on his neck earned while confronting a heckler at an outdoor speech. By most accounts more street- smart than smart-smart, George had a temper that could flash hot (“Bugs” implied “crazy”) but his sense of humor was said to be keen, especially when he used it to rankle his enemies.

By 1923, after running with other colorfully nicknamed North Siders (Charles “The Ox” Reiser, “Hot Stove” Jimmy Quinn, Tommy “The Terrible” Touhy) on safecracking gigs and prison breakouts, Moran was a full-on member of the North Side Gang. Under O’Banion’s leadership, the crew had their hands in burglary, gambling, and graft. Since passage of the Volstead Prohibition Act in 1920, of course, the big money was where the mouths were. The city’s bootlegging gangs were allied in fragile confederation at this time. The territories were generally agreed upon but the gangs were always angling for advantage, and a casual insult or a clever double-cross would be enough to bring out the switchblades and Tommy guns.

Turns out that’s exactly how Dean O’Banion got in bad with the Italians − he arranged to have his erstwhile business partner Johnny Torrio caught in a brewery raid hours after selling out his own interest in the place. Incredibly ballsy on O’Banion’s part, no doubt, but not so sound from a capo-strategic perspective. After compounding the dig at Torrio with further slights against other Italian gangs in the city, O’Banion was gunned down in his flower shop inside the year.

This puts Bugs Moran at his mentor O’Banion’s funeral, staring down Capone and Torrio. The next five years played out like a string of cinematic cliches, but with real guns. During one attempt on Torrio’s life, Moran had a gun to the Italian’s head after a shootout ambush outside his apartment. Click. No more bullets. Sirens sound. Moran and his men flee. Seriously. In another, Moran led a fleet of cars in front of Capone’s hotel headquarters, demolishing the lobby with thousands of rounds of submachine gun fire. Much glass was shattered. A young boy almost lost an eye. Capone was unhurt, but severely spooked.

The One You Know Better:
Al Capone

In late ’26, after a particularly brutal period of back-and-forth, Capone and the North Siders agreed to a truce. Good-natured backstabbing and the occasional arson attack appeared to be in bounds but “fusillade of bullets”-style assassination attempts were not. The detente held for a while with Moran alone atop the North Side gang.

I mean, stuff would happen, sure, the way it does in gangland: Bugs would hijack Capone’s booze shipments. Al would burn down one of Moran’s dog tracks. Bugs would burn down one of Al’s clubs. Bugs would have one of Al’s personal friends or gang members killed. Then another one. Then another one. In retrospect, Bugs was actually piling it on a bit heavy during this period, capo-strategically speaking, and his habit of calling Capone at the Lexington Hotel and blowing raspberries through the receiver was certainly not making matters any more amicable.

Capone had had enough. Working with “Machine Gun” Jack McGurn, he put in motion the hit on Moran that would become known as the St. Valentine’s Day Massacre. The plan was to catch Moran in a fake raid at a garage behind the North Side Gang’s headquarters in the Lincoln Park district. Believing he was meeting a local hijacker offering a great price on a stolen shipment of whiskey, Moran made his way to the garage on Valentine’s Day morning. Arriving late, he turned back when he saw a police car parked out front.

At that point, McGurn’s hired killers − out of towners, two dressed as cops − had seven North Siders up against the garage wall. They’d gotten the go-ahead to proceed when a lookout mistakenly thought Moran was amongst the group. Rounds from two Tommy guns, a sawed-off shotgun, and a .45 were emptied into the seven men’s bodies, heads and torsos first. The gunmen walked out, fake cops leading fake perps in a show for any witnesses peering out between drawn blinds.

No one was ever tried or convicted of the St. Valentine Day’s Massacre murders. Capone was in Miami at the time, but everyone knew he was behind it. Photos of the bloody victims outraged the public. The sensational crime made Capone a national celebrity, in a bad way, putting him squarely in the sights of federal authorities.

Moran soldiered on, holding his turf with what remained of his gang for a few years. Defections, bad alliances, and the repeal of the Volstead Act all took their toll, however. He eventually left Chicago, reverting to common crimes like robbery and counterfeiting while drifting state to state. He was convicted in Ohio in ’46 and but for a brief release ten years later, spent the rest of his life in stir. He died of lung cancer in ’57 at age 65 in Leavenworth Federal Penitentiary, ten years after Capone’s death of cardiac arrest brought on from syphilis, stroke, and pneumonia.

Moran’s aptitude and leadership is the subject of some debate these days with some holding that he was a thuggish reactionary who was continually out-maneuvered by Capone, and others that he was always the underdog in a battle stacked heavily against him, where simple survival was ample evidence of his wiles and grit. The Moran-boosters point to the daunting differential in manpower and gunpowder between the North Side and Capone’s Outfit. The Moran-haters rely primarily on the myth of Capone.

That myth has of course been burnished in the public imagination in the years since his death. Well before Tony Soprano came along to make it okay to (ambivalently) root for gangsters, we had already learned to look past Capone’s brutality − committed mainly against other brutes, and growing out of a foolhardy public policy − into the deeper reaches of his character. Moran has never been granted the courtesy of our fascination.

On screen, Capone has been played by Rod Steiger, Jason Robards, Ben Gazzara, Robert DeNiro, F. Murray Abraham, and other actors whose names you have heard. Bugs Moran has been played by Dennis Patrick, Murvyn Vye, Ralph Meeker, and other actors whose names you have not. Actually, Harry Morgan is also on that list (that’s Joe Friday’s partner Bill Gannon to some of you, Colonel Potter to others) but the point remains.

In 1930, Capone was named the first Public Enemy Number 1 by the Chicago Crime Commission. George “Bugs” Moran was Number 6 on the list.