In an early standards war played out across the fields of Industrial England, an engineering genius loses out to a more widely adopted, though possibly inferior, system. 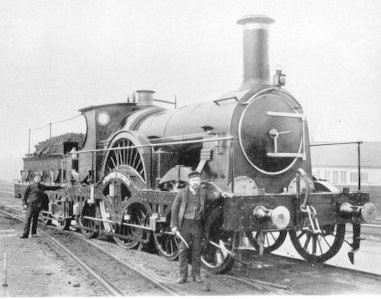 Now hold your (iron) horses, all you railroad geeks! I know you are already halfway through an e-mail pointing out that narrow gauge rail is the real also-ran in this contest, but bear with me.   The fight for supremacy in railroad gauge was never much of a battle in America. It was truly contested in Britain years before the colonials got involved. And there, the fight was between broad gauge and standard gauge.

Okay, backing up. Railroad gauge is the distance between the rails. Carriages are designed to work on a specific gauge, so where tracks of differing gauges come together, cargo and passengers must be transferred from one line to the other. The engineers at the earliest railroad companies all realized the importance of a standard gauge in the interests of what would today be called interoperability (back then it was called there is no effing way I am going to reload all that coal, guv’nor, just so you know.) But there was considerable debate about what gauge was optimal. The debate played out in various scientific and political settings but it was really waged across the fields of England where an assortment of railway companies raced to link the commercial hubs of the Industrial Revolution.

By the mid-1800s the railway companies had gathered into two competing camps. The standard gauge was established most importantly by George Stephenson, a mechanical engineer who designed the Liverpool and Manchester Railway to use a 4 foot 8½ inch width. The success of that project in 1930 and subsequent growing influence of Stephenson and his son Robert convinced other railway companies to adopt the 4′-8½” gauge, which is also referred to today as the Stephenson standard.

(For those wondering where Stephenson came up with that particular number, he was familiar with it, give or take a half-inch, from the mine tramways of County Durham where he spent much of his early career.   For those wondering how the mine tramways got that way, beware, the causal chain gets extremely fuzzy. Many scholars find the average width of a horse’s ass to be a key factor, believe it or not, since it in turn determined the optimal wheel width for the carts they drew. Others claim it goes even further back, to the width of Roman chariots. The rutted ridges on Hadrian’s Wall are spookily close to 4’8″ apart!)

Fast forward a few short years. An engineering genius named Isambard Kingdom Brunel was designing the Great Western Railway. It would run between London and Bristol and by his insistence it would run on broad gauge track – over 7 feet in width.

Brunel’s decision was risky. By this point, most of the railways in Britain were using the standard gauge. Brunel felt the wider gauge would allow for more stable passenger rides, at higher speeds, with the ability to haul larger loads of freight. He challenged what he saw as the lack of scientific basis in the Stephenson standard and went to great lengths to substantiate his claims mathematically, on the scratchpad, and empirically, on the track.

The Great Western was a smashing success when it opened in 1838. No less than the railway itself, the series of tunnels, bridges and viaducts over which the rail passed stood as monumental engineering achievements.

Thus were the terms set, companies in the years after aligning behind the narrower Stephenson standard or the Brunel-backed broad gauge. The stakes were high. Railways were authorized by Acts of Parliament, including the gauge to be used, and how the politicos decided in specific cases determined how territory was apportioned, which companies would thrive, and how the respective (incompatible) networks would grow.

By 1946, everyone with a stake in the game realized there had to be a winner. A Royal Gauge Commission was convened, arguments pro and con advanced on both sides. The Commission decided in favor of the 4′-8½” standard (with an exception for Ireland) largely based on its far greater adoption – an 8x multiple of standard to broad was then in use. This effectively ended new development on broad gauge and over the ensuing decades most extant broad gauge track was converted to mixed gauge, using a third rail, or to the Stephenson standard.

Most rail lines in the world now use standard gauge, including in the United States, where most early railway development was built to British standards under the assumption that British locomotives would be used. (A faulty assumption it turns out, but that’s a whole other story.)

Brunel is not well known in the States. In Britain, he is highly celebrated, ranking second behind Winston Churchill in a 2002 BBC-sponsored poll of the 100 Greatest Britons. (Princess Diana was third; Darwin fourth.) Besides the Great Western Railway, he is known for his work on the Thames Tunnel, the Clifton Suspension Bridge and a host of other spectacular engineering achievements.

Stephenson also had an impressive body of work to his name but his legacy revolves primarily around his foresight in advancing the use of standard gauge so the chaps down the freight yards did not have to reload all that coal.

The advantages and disadvantages of the differing standards are fairly well agreed upon. Narrower gauge allows for more flexibility, particularly in mountainous terrain, and is typically cheaper to build out.   This drove the construction of many narrow gauge railways in the U.S., whose numbers have dwindled and whose lines are frequently used now for tourist routes.

On the scientific merits, there was much to Brunel’s argument in favor of the wider gauge. It allows for wider carriages and thus wider payloads.   The Royal Commission’s decision came down to what would have the least disruptive impact at the time. One cannot anticipate any serious drawbacks to that decision in the foreseeable future, however if the butt-size of the average American grows as much over the next century as it has in the last, our commuter descendants may wish those MetroNorth line’s seats could be a foot or two wider.