The determining factor in this classic standards war came down to, of all things, American’s love for movies and sports.

Kids, before video was streamed from the cloud to your mobile device, before YouTube, even before DVDs, video came into your home (more likely your parents’ home) on cartridges of magnetic tape which were played back on metal boxes with lots of moving parts inside. Crazy, I know, but that’s the way things worked back before we could send ones and zeros through space.

In the mid ’70s, the battle to establish the technology standard for home video was waged by several consumer electronics companies, playing out in R&D labs and board rooms, in government ministries and in the minds of consumers. Recording and playback products were prototyped and moved into production. Most of them rapidly fell by the wayside, leaving two giants to fight it out, katana to katana.

Sony’s Betamax format (so named for the Japanese word used to describe the way the signals were recorded, as well as the β–shape traced by the tape as it ran through the casing) was considered technically superior and, first out of the gate, it completely dominated the U.S. market in 1975. JVC countered with its Video Home System, or VHS, with lower price points and a two-hour playback time compared with a one-hour limit on the original Betamax tapes. 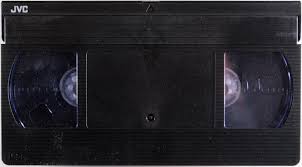 Since the early use of the technology was for recording TV movies and sports, that difference proved critical. At the same time, JVC elected to license the VHS technology to other manufacturers while Sony kept the Beta format proprietary. This resulted in competition in the market for VHS players, which in turn drove lower prices for the consumer.

Lower cost and longer playing proved to be the winning combination for VHS and the one-two knockout punch for Beta. Even though they were first out of the gate with a technology supporting superior video quality, by 1981, Betamax’s market share had shrunk to 25% and by the late ’80s, with video stores stocking exclusively VHS, Sony was flying the surrender flag.

With the advent of laser-based disc technologies, they’re both effectively gone. You may still find an old VHS player at a neighborhood garage sale (don’t buy it) or in your father’s closet, whereas if you own a Betamax player, you are either a science museum curator or some sort of weird video technology completist (and for that you should be commended, although you are disinvited from my next dinner party, you dweeb. Sorry.)

There are many lessons to be learned in this tale (indeed there are full studies dedicated to it) but the one we prefer to remember is based on that two-hour running time: when dealing with the appetite of the American consumer, it’s always best to be on the side of greater portion size.